This is the third VSIP in Binh Duong, a major industrial hub in Vietnam, and the 11th in the country. Invested with more than 6.4 trillion VND (280 million USD) in total, it will cover 1,000 ha in Hoi Nghia ward of Tan Uyen town and Tan Lap commune of Bac Tan Uyen district.

The park will be equipped with uniform, green and smart infrastructure to attract investments in the sectors of electricity, electronics, production and assembly of transport vehicles, mechanics, industry support, textiles – clothing, food, beverages and logistics services.

Addressing the event, Prime Minister Chinh said Vietnam and Singapore have recorded flourishing relations in all areas including economic ties as seen in VSIPs, whose later built parks are more modern, towards a green, sustainable and inclusive development, which corresponds to the trend of the fourth industrial revolution.

He asked the Binh Duong administration and investors to form a next-generation industrial ecosystem associated with the fourth industrial revolution as well as green, smart, sustainable and inclusive development that leaves no one behind, thus contributing to the
Vietnam – Singapore partnership.

VSIP No. 3 should become a symbol of relations between the two countries, deeply imbued with the characteristics of Singapore, and bring benefits to investors, local residents and Binh Duong as a whole, the head of government stressed.

The Prime Minister also asked the province to continue to create optimal conditions for investors and to ensure an increasingly better material and spiritual life for local people, including those displaced to serve the development of the project.

The government always provides the best possible conditions for businesses to invest and grow based on Vietnamese laws, the country’s commitments to the international community and international law, he said.

Vietnam has taken part in 16 free trade agreements, so investors will not only have the Vietnamese market but also a larger market generated by these 16 agreements, according to the prime minister.

Also at the ceremony, Prime Minister Chinh witnessed the granting of investment registration certificates and memorandums of understanding to investors in VSIP, including a billion-dollar project by LEGO Group. 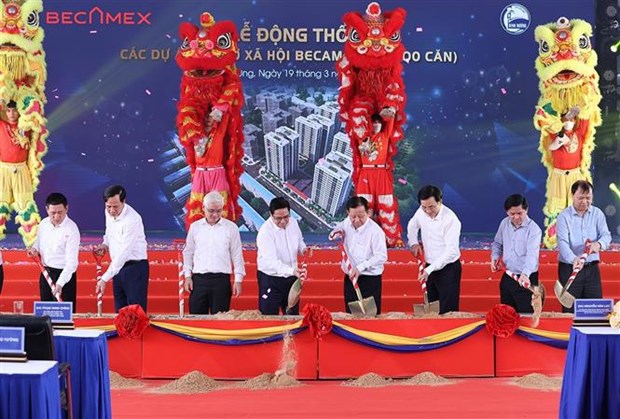 Prime Minister Pham Minh Chinh (fourth from left) and others mark the construction of a social housing project in Binh Duong on March 19. (Photo: VNA)

On the same day, the Prime Minister participated in a ceremony marking the construction and inauguration of some Becamex social housing projects in the province’s Thu Dau Mot town.

As a dynamic province in the southern key economic region, Binh Duong currently has more than 1.6 million workers.

In order to create favorable conditions for living and working, local authorities paid attention to the development of social housing. So far, the province has attracted 86 social housing projects covering almost 200 ha of land, with around 3.9 million m². floor. However, existing social housing does not yet meet demand in reality./.