City of HCM (VNA) – Prime Minister Pham Minh Chinh underscored the need to set up a joint mechanism for managing the development of the southeast region and the southern key economic region in general while presiding over a conference in Ho Chi Minh City on July 9.

The conference reviewed the implementation of Politburo Resolution No. 53-NQ/TW, dated August 29, 2005, on Promoting Socio-Economic Development and Ensuring National Defense and Security in the South- is and the southern key economic region by 2010 with a vision towards 2020, as well as Conclusion No. 27-KL/TW, dated August 2, 2012, on the further implementation of the resolution.

The release of the documents aims to maximize the region’s resources, potential and advantages for faster, stable and sustainable growth, Chinh said.

The prime minister highlighted the important strategic location of the southeast region and the key economic region of the south in terms of economy, politics, national defense and security.

Highlighting the limits of their development, Chinh said a new resolution is needed, with new guidelines, policies and mechanisms corresponding to the current situation, thus creating a new space and impetus for development. 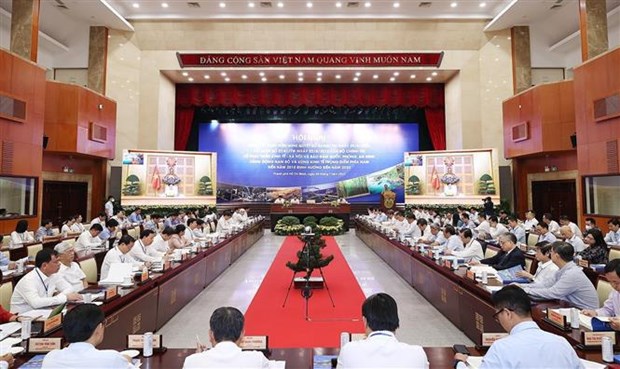 During the conference (Photo: VNA)

The Head of Government called for the continuation of economic restructuring, the intensification of regional connectivity, the promotion of science, technology and innovations, while paying more attention to socio-cultural development, the improvement of people’s material and spiritual life, consolidating national defense and security, and emphasizing the construction and rectification of the Party and the political system.

In the short term, priority must be given to stabilizing the macroeconomy, controlling inflation, guaranteeing major economic balances, controlling the COVID-19 pandemic, in particular vaccination, treating weaknesses in the medical sector, the disbursement of public investments and the promotion of socio-economic recovery programs, Chinh said.

Over the past 15 years, ministries, agencies, Party organizations, authorities and people in the southeast region and the southern key economic region have actively implemented the tasks, solutions and objectives defined in the two aforementioned documents.

Thus, the regional gross domestic product (GDP) of the southern key economic region in 2020 was 2.6 times higher than in 2010.

During the period, the number of new businesses in the region also increased by 81%, the highest rate nationally. In particular, FDI companies in the Southeast region accounted for half of the national figure in 2020.