Vietnam Airlines has become the first airline in Vietnam to open a non-stop air route to the United States, which is of particular significance. Could you tell us about the preparation period?

It was a long and difficult road. In the aviation industry, air routes with longer distances have greater challenges.

In 2001, Vietnam Airlines set up its representative office in San Francisco, even before Vietnam and the United States signed the air transport agreement, which showed the importance of the American market for the Vietnamese flag carrier.

However, the air route to the United States imposes the most stringent requirements for technical safety and aviation safety in the world, while competition between airlines is very tough. This is why in the history of Vietnamese aviation, there has never been a route that has taken so much time and effort to plan.

Airlines had to go through a “forest” of procedures to get the license to fly in the United States. First, the United States Federal Aviation Administration (FAA) assesses the capacity of the national aviation authority.

After numerous evaluation campaigns, the Civil Aviation Authority of Vietnam (CAAV) obtained a CAT1 certificate from the FAA in February 2019.

After that, the airlines got ratings from nine US agencies. To date, Vietnam Airlines is the first and only air carrier authorized to provide nonstop routine flights to the United States.

Why did Vietnam Airlines decide to fly to the United States right now?

The Covid-19 pandemic is a major factor that prompted Vietnam Airlines to start flying nonstop to the United States this year-end. Falling into crisis, air carriers around the world have to adapt to new circumstances, including Vietnam Airlines.

There are always opportunities at risk, and the opportunity we see is to achieve the nonstop flight plan to the United States.

The international market has declined over the past two years. It is difficult to lease and sell widebody aircraft. A carrier’s greatest asset is the fleet. In the meantime, if we continue “in the field”, we will not have cash. Therefore, we must seize every opportunity to take off.

We can see that there is a demand from the Vietnamese community in the United States to travel to Vietnam, while investment and trade activities between the two countries are increasing, resulting in higher travel demand. from businessmen. Notably, the freight transportation market between Vietnam and the United States continues to grow and has not diminished during the Covid-19.

Therefore, we believe that opening up the air route will help us get more revenue and lessen the financial loss caused by the laying off of manpower, and it will help build a bridge for trade between the two countries. 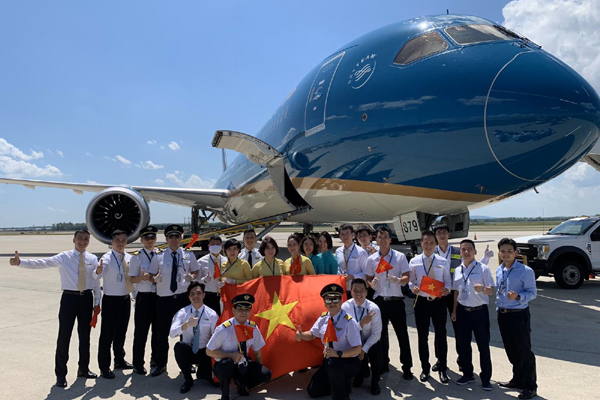 Moreover, the provision of two flights per week will give impetus to Vietnam Airlines to expand rapidly once the market fully recovers from the pandemic.

What about profit and loss? How do you position Vietnam Airlines products on the air route?

It is difficult to predict the break-even point, as the flow of passengers has not returned to the way it was before the pandemic. But our calculations show that the trip from HCM City to San Francisco would be variable cost efficient in the first year.

Vietnam Airlines has exceptional advantages on the intercontinental air routes it operates. Benefits will be further promoted when passengers during the pandemic do not have to contact others at transit points or stay in hotels to wait for connecting flights.

Flights take off in the United States at the end of the day, so after a night on a plane, people will be full of energy to welcome a new day on the other side of the hemisphere.

Flights from HCM City take off in the late afternoon and passengers arrive in the United States around 7:30 p.m.

The flights will last 14 hours, much shorter than those which last 20 to 30 hours with a stopover currently provided by international flights.

As the only Vietnamese airline that flies non-stop to the United States, we plan to attract passengers with high payment ability, including business people and business passengers who want to save time.

How about the importance of the non-stop air link between Vietnam and the United States?

Put yourself in the shoes of a Vietnamese who lives far from his homeland. They will surely be overflowing with warmth when they can return to Vietnam on a Vietnamese plane, enjoy Vietnamese cuisine and speak Vietnamese.

Despite the Covid-19 crisis, Bamboo Airways and Vietnam Airlines have announced plans to fly nonstop to the United States by the end of this year.