Vietnam Airlines has issued a tender for three Airbus A320neos on lease, raising questions about whether the airline will add more regional jets.

The national carrier indicates in a press release that it is requesting a request for proposals (RFP) for the lease of three A320neos to be delivered this year and/or next year.

The carrier had previously planned to lease A320neos from Chinese lessor ICBC Aviation Leasing, but last year decided against taking the new plane. The lessor then leased the plane to low-cost Mexican airline Volaris, still sporting the livery of Vietnam Airlines.

The photo shows the Volaris A320 still with Vietnam Airlines livery (Credit: u/frooshanta via Reddit)

Last year, Vietnam Airlines was still struggling with the pandemic and at that time the country was still under lockdown. But since March, the market in Vietnam and elsewhere in Southeast Asia has rebounded.

Vietnam Airlines is an Airbus A321 and Airbus A321neo operator, so its decision to add the smaller capacity A320neo is an interesting one. The general trend in the industry is to move towards larger narrow bodies.

But the advantage of the A320neo is that it could be useful for finer indoor links. The A320neo and A321neo belong to the same aircraft family, so pilots can easily switch between the two. The A320neo being a smaller capacity aircraft than the A321neo – 150 passengers in a spacious two-class configuration compared to 180 passengers for the A321neo in the same spacious configuration – means that it can take off on slightly shorter runways than the A321neo.

Both airports have a 1,830 m long (6,004 ft) runway, but the main issue is not the length but the width of the runway; it is only 30m wide while Airbus A320 family aircraft need a 45m wide runway. The A320neo also needs a runway length of over 1,900m, but could still take off from a 1,830m long runway with certain payload restrictions.

Bamboo Airways is Vietnam Airlines’ main full-service competitor and serves both of these markets with Embraer E-190s powered by GE CF34-10E engines.

Fortunately for flag carrier Vietnam Airlines, the Civil Aviation Administration of Vietnam (CAAV) is working on an upgrade at both airports.

Smart Aviation Asia-Pacific reported in March, citing a CAAV letter to Vietnam’s Ministry of Transport, that it proposed to close Con Dao Airport from April 2023 to December 2023 for renovations.

The CAAV says the upgrades include widening the runway to 45m (148ft) from 30m, constructing a new taxiway, lengthening three existing lanes and widening the apron so that eight planes can park there, doubling the current parking capacity.

Vietnam Airlines has announced plans to replace its ATR 72-500s with regional jets and is considering the Airbus A220 and Embraer E2.

At Asia Routes conference in Danang in June, in which Embraer was a main sponsor, Vietnam Airlines CEO Le Hong Ha said he plans to add regional jets next year after airport upgrades.

But it makes no sense to wait for airport upgrades to be completed, when the main advantage of getting the regional jets is that these planes can serve these airports without the need for them to be upgraded. .

The airport upgrade benefits the A320neo, allowing the type to serve Con Dao and Dien Bien Phu, and removes the need for regional jets.

It’s also worth noting that Vietnam Airlines has been talking for a decade about buying regional jets, but nothing has happened.

The need first arose in 2014 when the carrier sold its two aging Fokker 70 aircraft, leaving it with no aircraft smaller than its ATR 72-500s.

The carrier was initially considering the Sukhoi SuperJet, Mitsubishi Regional Jet and Bombardier CRJ900. Bombardier even brought a Delta Air Lines CRJ900 to Vietnam in late 2018 to show off Vietnam Airlines. 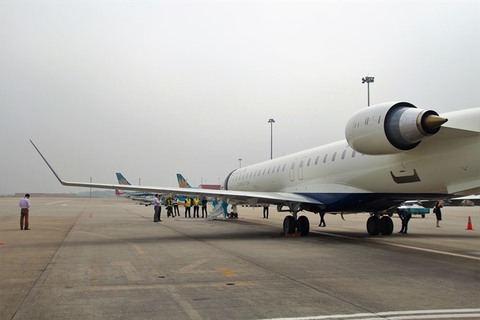 A photo from Vietnam Airlines shows the Bombardier CRJ900, in Delta Air Lines livery, in November 2018 at Hanoi’s Noi Bai International Airport as the aircraft was on a demonstration tour

But the carrier never made a decision. Then, in April and May this year, Embraer and Airbus respectively brought E2 and A220 demonstration aircraft to Vietnam. But still no decision.

Now, with airport upgrades and the prospect of A320neos coming to market, it seems unclear if Vietnam Airlines will get regional jets after all.

The regional jet’s superior short take-off and landing capability gives the airline greater flexibility, but from the perspective of the fleet community, there is a strong case for Vietnam Airlines to have a fully fledged fleet. of the A320neo family.

Additionally, an A320neo, being a larger capacity aircraft, has a lower cost per available seat kilometer (ASK) than a regional jet. Vietnam Airlines would need to fill the biggest planes to make it work, but could do so by reducing its fares on the routes.